I guess I forgot to say hello, where are my manners?

Sorry folks, I just plunged in and plain forgot to say howdy. So this is late, gomenasai!

I'm a complete newbie, just started training in Isshinryu in September of 2008 in the Detroit, Michigan, area. I'm a white belt. I train twice a week, and I've got a long way to go because I am overweight and out of shape, but I'm giving my maximum effort, and I am improving my physical condition as well as learning (slowly) my kata and basic exercises. Sanchin was my first kata, and I'm halfway through Seisan.

I have a little trouble with my feet because I am naturally splay-footed, so turning my feet to a Seisan-dachi is actually not comfortable for me, and Sanchin-dachi feels like I'm twisting my forward knee off. But I'm working on it.

I have had very little prior training. As a boy growing up in the cornfields of central Illinois, I read and tried to emulate the moves I saw in Bruce Tegner's books - that's the closet thing to 'karate' that there was around in my town of 400 people.

Later, in the Marines, I was stationed in Okinawa as a military policeman, on Camp Butler. I was lucky enough to have met Master Angi Uezu, who was a security guard working on the gates with the MP's. However, I was young and foolish and turned down an opportunity to train in Isshinryu while I was on Okinawa in the early 1980's. What a pity. The only moves we learned from Uezu-san were things he taught us that MP's need to know - takedowns and come-alongs and locks, that sort of thing, all very non-lethal.

I later took about three months of training in Wado Ryu after the Marines, but it was in the late 1980's in Lakewood, Colorado, and I have sadly forgotten it all.

So I am in fact a raw beginner. Just feeling my way along, doing the best I can.

Anyway, I'm quite happy to have found this discussion forum, it looks like a very friendly place. I look forward to the cooperative exchange of information from the other members here.

Thank you for your service sir and welcome to MT!

Welcome to the site and Thank you for your service to our great land.:asian:
B

Hello and welcome to MartialTalk ... I had already noticed a few of your posts ... enjoy!

Goin' with the flow

Glad to have you here Bill. By the way who are you training with down the Detroit way?

Brian R. VanCise said:
Glad to have you here Bill. By the way who are you training with down the Detroit way?

Sensei Daniel A. Holloway at Holloway Isshinryu Karate in Waterford. I am enjoying it thoroughly.

It's a compliment to the site that you've already noted that MartialTalk doesn't tend to favour the same aspect of vituperative debate that tends to infect other boards that try to cater for all styles. It seems that like attracts like as, altho' we get the odd overly-argumentative member, most people here, like yourself, are in the mature and sober headed tranch of the population.

Happy posting, good sir ... and I envy you your time in the Japanese isles .
OP

Sukerkin said:
It seems that like attracts like as, altho' we get the odd overly-argumentative member, most people here, like yourself, are in the mature and sober headed tranch of the population.
Click to expand...

Besides, the last thing I would want to do would be to show disrespect for my dojo or my sensei, whose names I have now used.
OP

Sukerkin said:
I envy you your time in the Japanese isles .
Click to expand... 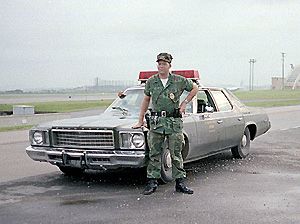 I must also add that I did very much enjoy having been able to spend a year in Okinawa. It is an amazing place, full of history and tradition.

I also took some leave time and flew to the Philippines, where I spent a couple weeks on the beaches of Grande Island and wandering the streets of Olongapo City - back when the US still had a couple bases there.

While I did not take advantage of the opportunity to train in martial arts while I was in Okinawa, I did try to get out into town as often as possible, rather than staying on base and drinking in the Enlisted Men's Club.

I tried my best to learn some Japanese, I tried to absorb the culture as best I could. I learned some things that have served me well over the years - one of the best being that showing respect for other people and their culture, and attempting to speak even a few words of their language will open up new worlds to you.

In my later years, I worked as a 'road warrior' in the IT world and was sent to China, Korea, Germany, Brazil, and french-speaking parts of Canada, and just remembering those two things always ended with me being welcomed with open arms. Respect them and try to learn a few words of the language and they will welcome you and do anything they can to help you.

Although - funny story - the first time a Korean manager invited me to an employee group dinner and he put his hand on my thigh while we were sitting cross-legged on the floor, I nearly jumped out of my skin! Fortunately, I had read that this was merely a sign of friendship, not some kind of funny business. But it was a really 'creepy' feeling for a Westerner like me!

Greetings and Welcome to MT...Don't feel too bad about it as I did the same thing...

Welcome aboard! We're very happy to have you here! :asian:

Bill Mattocks said:
Sadly, I am 'overly-argumentative' about many things, as I've often been told. But I try to confine my need to argue to situations where I know what the heck I am talking about. I have strong opinions about many things, but I know next to nothing about martial arts, I am a humble beginner. Being unqualified in martial arts, I am unqualified to offer argument.
Click to expand...


Nothing at all wrong with holding strong opinions and standing by them in intelligent debate. I reckon that you'll do fine by the sound of things, especially given that off-the-bat you know the importance of knowing what you don't know :tup:

What I meant by "overly argumentative" is a member who fails (consistently) to grasp the basic tenets of productive discussion in the on-line environment.

Those that try to shout others down, will not give fair hearing to alternative viewpoints, belittle and berate opinions rather than giving a good account of their own ... these are the type of behaviours I was referring to.

Welcome to MT! I am enjoying your posts already.
A

Welcome! I studied isshin-ryu in the 70s/80s also for a few years and heard great things about Angi Uezu.
You must log in or register to reply here.