Has Shotokan Karate helped you in self-defense before?

One thing that I came to realize, concerning using Karate in a fight situation, is the fact that techniques taught, work if you stay in the fight.

What I mean by that is that Karate (at least the Toyama line) focused on three concepts when it came to combat...'Enter, Counter, Finish'. And, you would hear that there is no stepping back in Karate, it took a few fights to understand what this means.

If you stay in the fight, by deflecting attacks, and then counter those strikes, it keeps you inside the striking range. And, you are able to initiate throws, takedowns and such.

Karate does work, and in my opinion very effective in the real world. Now this is just from my personal experience.

I believe that I have fought a diverse group of fighters in my day, in and out of the ring (mostly out) challenges were made, and I usually accepted them.

As, in those days there was known that a person would train and spar for years and then, when a real situation came to play...that person would lose miserably. Because of this, I took my art and tested it everywhere and against whomever I could...be it boxers, wrestlers, Mauy Tai, Kung Fu, TKD and a string of others systems, street fighters, even some weapons and for me, Karate seemed well rounded.

Doing this and being there in the 80's when point fighting became popular, I realized that the sport aspect, changed how Karate was taught and distributed for actual combat.

But in the end, I came to realize that for me, there wasn't much else needed.
T 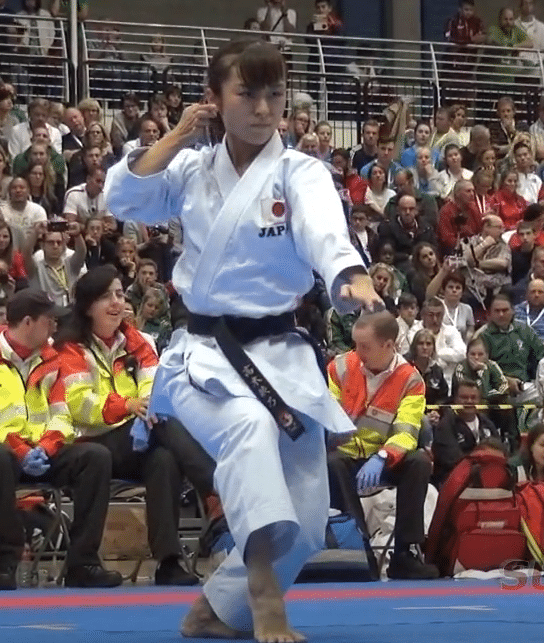 See this thing right here? Imagine that but my right hand is a closed fist. Without going into too many details about what happened: person shoves me around and tries to start a physical confrontation with me, I shove person back with my left hand and raise my right hand with a closed fist - all the while putting my weight on my back leg and keeping my front leg nice and relaxed in preparation for a groin kick if need be - telling them to leave me alone. They realize I am capable of defending myself so they lay off. I return to a neutral position and we both walk away. Situation defused, nobody hurt.

People say that a Karateka who goes their entire life without actually fighting is doing Karate the right way. Ever since this confrontation - which was thankfully the only one I've had since I started doing Karate - my interpretation of bunkai takes into account not only actual combat techniques but also conflict defusal techniques such as this one. I highly recommend that every martial artist study the science of deterrence, just as, for example, a policeman would. Any fight that both parties can walk away from unharmed is a fight won for both sides, and any hoodlum you can fend off using words or gestures is a hoodlum that might reconsider their actions in the future.

Hanzou said:
Mugging isn't really a huge issue for me because I have no problem handing my wallet over if I'm being mugged.
Click to expand...

I don't think assuming that the mugger won't stab or shoot you anyway is much of a safe bet. I'd rather rely on my concealed carry than compliance.

Hanzou said:
That's kind of my point; Mugging isn't really a huge issue for me because I have no problem handing my wallet over if I'm being mugged. There's nothing in that wallet that can't be replaced relatively quickly.
Click to expand...

Questions for senior practitioners of Shotokan and Ryu-Te

about karate and shotokan
2

J
The difference between various styles and ryus of karate, advantages and disadvantages.