Hi again, I am making this thread to impart as much as I can on my knowledge of building strength. I have been researching different books on this matter and would like to share what I have found. I couldn't find a more appropriate forum "part" to post it on so I just put it on General Martial Arts Talk.

To start with, progressive overload is actual not optimal for building strength. The Soviets worked relentlessly on finding the best strength training programs for the weightlifters for decades - their weightlifting program took literal decades to build by numerous scientists and trainers for their weightlifters, with different things being tried and tested on low-level competitors to gauge success before attempting with higher-level competitors. Their program was so precise that attempting to study it by modern scientists has been fruitless - as soon as they thought they began to see a pattern, it varied immensely for no apparent reason.

There are multiple methods to building strength that are preferable to progressive overload. One is step loading which was used again, by soviets and old-timers. Instead of constantly attempting to try to lift more weight by adding very slight mass (e.g. 2.5kg each side of a barbell), and trying for new maxes often, soviet weightlifters were told to stick to or below their current maximum attempt. They would train at or below this weight for a very long time until they felt that their current "max weight" was comfortable, or even easy. They would then jump up to their next max weight, making huge jumps at a time. Old-timers who used this method said it was to "solidify the gains".

There is also cycling. This was the predominant strength training program in the 70s and 80s in America which led the American Powerlifting Team to success, used famously by the likes of Kirk Karowski, Ed Coan, and more. It involves training in cycles. Marty Gallagher and Bill Starr designed a program which involved cycling.
4 weeks with sets of 8, 4 weeks with sets of 5, 4 weeks with sets of 3. For each 4 weeks:
Russian scientists discovered that the endocrine system can only support around 2 weeks of heavy lifting for every 4 weeks of lifting. This cycling system plays best in this optimal parameter. The most complex system however is Variable Loading which I am still struggling to understand. The following method was proposed by Professor Arkady Vorobyov, scientist and champion Olympic weightlifter. He argued that changes in nature are not "gradual" (as progressive overload works) but "discrete". Certain load parameters are set e.g. each month you know you will perform around 500 pull-ups, or that you will lift around 70% of your max. These numbers are arrived at experimentally, sometimes over decades. The jump in volume from one unit of training (e.g. month, day, year) is huge and a minimum of 20%. The professor concluded that training for strength must be highly variable, and the 20% volume jump is known as the Delta 20 Principle. 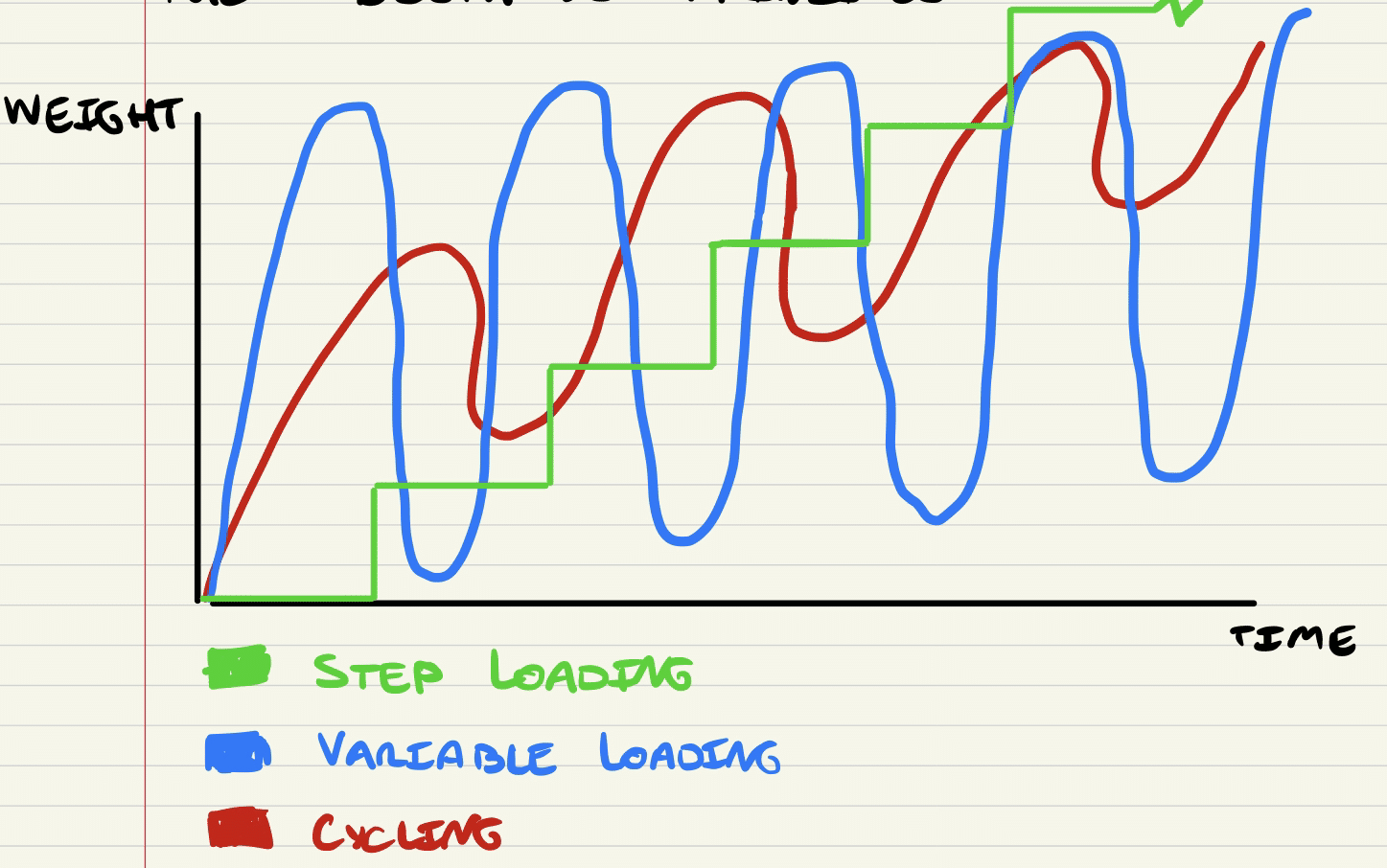 (for reference, not 100% accurate, just a sketch attempting to visualise the different methods)

Furthermore, when building muscle, lactic acid plays a more important role than the fitness community lets on. Lactic acid is necessary to work hard, but too much of it is destructive. There are methods developed by the founder of plyometrics, Professor Viktor Suleyanov, to develop Type-1 endurance fibres, the muscle fibres that contract slower but are more efficient than others. These are supposedly great for grappling martial arts such as BJJ where you have to support large amounts of weight for long amounts of time e.g. framing, pushing, pulling, but can be detrimental to explosive movements found in striking arts. They also come "pre-equipped" with mitochondria, whatever that means, so building these fibres up will automatically increase aeorbic endurance as well as muscle mass and strength.

The method involves training 2-4 times weekly, in sets that are timed at 30 to 60 seconds. You choose two exercises from separate and completely diverging muscle groups such as bicep curls and barbell squats. You only perform reps within the ranges of motion in each exercise where there is no stacking i.e. no support from skeletal structures. For example, when squatting, a rep will be performed just below parallel depth (but not so low that you sit on your ankles) and just above parallel (but not so high that your knees do the work instead of the quads). This maximizes time under tension, as well as the tension itself, focusing specifically on the parts of the exercises which are purely performed by muscles. Each rep is performed extremely slowly. Each squat set needs a minimum of 5 minutes rest for those experienced in this, but it's better to take around 10. Therefore, you can put the second exercise inbetween the sets of the first. Rest between sets must be active rest, such as walking or extremely light skipping. This is currently the strength conditioning used by National Russian Sambo and Judo teams.

Lastly, asymmetrical loading is something I recently discovered can be very beneficial. In Pavel Tsatsouline's Simple and Sinister, 2013, he states that an assymetrical load challenges the body (especially its trunk) and increases the muscle recruitment for the exercise. In an experiment with Pavel where he compared his one arm kettlebell swing to his two arm kettlebell swing, he found that the one arm swing increased his glute contraction by 20% and his lat contraction by 50%.

I really hope this helps. If there are any experts here on this topic, please correct me on anything incorrect. I got this from deep diving specifically into Pavel's literature. Once I have read all his books I am thinking of investigating Mike Mentzer or old strongmen books. Sorry it's so long.

"There are methods developed by the founder of plyometrics, Professor Viktor Suleyanov".

The lineage of plyometrics...is American, with a little Russian flavor.

Interesting ideas. I might try to experiment with some of them whenever I can get myself motivated to get back to a consistent dedicated strength program.

OK, now I understand who this dude is. Interesting videos online.

I couldn't stop laughing at the figgity translator. Too much coffee maybe.

Tony Dismukes said:
Interesting ideas. I might try to experiment with some of them whenever I can get myself motivated to get back to a consistent dedicated strength program.
Click to expand...

As soon as I am back in Glashow I am switching from progressive overload to step loading. I believe I accidentally achieved its effect recently, as in December I couldn’t even deadlift 140kg and after 2 months of constant training with zero PR attempts, I hit 150kg fast
You must log in or register to reply here.

What do you look for in a gym

How effective is the MT knee strike?