Whats your carry knife and how do you carry it?

kiai said:
I wasn't posting for conversation, just to put across my point of view - and I don't say that with disrespect. I understand some people will simply hold a different perspective to me.

And yes, you are correct, I perceive everybody whom conspires to work against my freedom to be an enemy - to my freedom, and in turn, myself.

How else should they be viewed, then, really? Friends?
Click to expand...

As civil servants, to be respected.
As a law abiding human, I treat LEOs with dignity becoming of the office which they hold.

I don't fear cops. I respect them. I don't look up to them, or down upon them. Behind the badge, they are just as human, and frail as the rest of us. Some cops deserve support, because they check, and stop corruption, and others should lose their position because they violate the office.


Got this knife (exact model) when I was 15 years old. Open Carry on right hip. 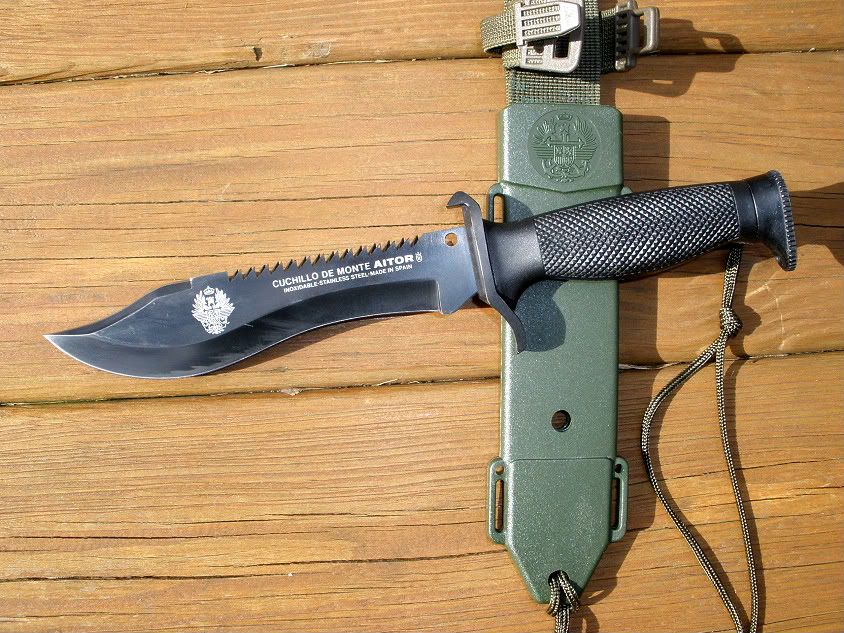 TSDTexan said:
As civil servants, to be respected.
As a law abiding human, I treat LEOs with dignity becoming of the office which they hold.

I don't fear cops. I respect them. I don't look up to them, or down upon them. Behind the badge, they are just as human, and frail as the rest of us. Some cops deserve support, because they check, and stop corruption, and others should lose their position because they violate the office.


Got this knife (exact model) when I was 15 years old. Open Carry on right hip.
View attachment 19466
Click to expand...

Odd. Pretty sure that under Texas law, that knife is illegal to carry, for several reasons:

The blade may or may not be greater than five and a half inches in length-this would make it illegal to carry.

The double finger-guards, and (false) double edge make this a stabbing weapon, or dagger-also illegal to carry, though this is largely discretionary on the officer's part.

I carry a "Ka Bar" plain blade in a sheath that I wear around my abdomen. It came in handy once during a nighttime encounter walking home from work.

Jujutsuka said:
I carry a "Ka Bar" plain blade in a sheath that I wear around my abdomen. It came in handy once during a nighttime encounter walking home from work.
Click to expand...

You carry a knife that is illegal to carry in PA?

kip42 said:
I currently carry a Kershaw speed safe tanto half serrerated in the rear pocket of my dominate hand. Sometimes I carry a Crkt M21-14SFG in my weak hand front pocket. What do you carry, where do you carry it and why?

I cant find a satisfatory carry knife that is strong, 4 inches, tanto, half serrated, with a lock BETTER than a linear lock. I will keep looking and hope to eventully find something.
Click to expand...

Sorry I don't understand. Are you asking if you can legally carry knife for self defense.

What city or state are you in? So we can look up the law in your area.
C

I carry a spyderco manix 2. Its a solid knife with a deep choil which I really like, is pretty innocent looking overall, has a very solid lock, and I can deploy it with some speed if necessary. I'm a big fan of Spyderco's leaf blade design to begin with, and the manix 2 is about as good as it comes in my view.

Dirty Dog said:
You carry a knife that is illegal to carry in PA?
Click to expand...

Honestly, I didn't know it was illegal when I first purchased it. But to be fair, what was even more illegal than my knife purchase is the amount of people who tried to attack me and co-workers for no apparent reason whenever we worked late nights. I'm not advocating knife violence, I'm just saying that enough is enough sometimes, and we need to defend ourselves by any means necessary.

Balisong are not legal to carry in California, from my understanding.

frank raud said:
Balisong are not legal to carry in California, from my understanding.
Click to expand...

California is strictly fixed blade in a sheath visible on the belt....which is funny, to me.... 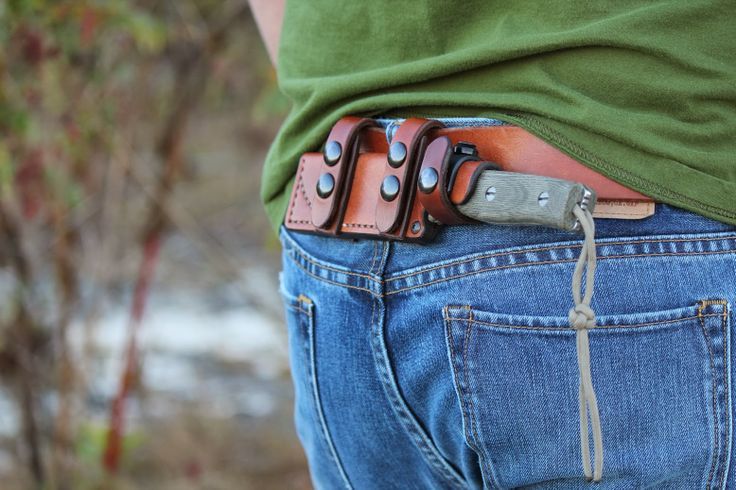 I have to admit I do not understand why so many people are choosing to carry a knife that is illegal.
If you use an illegal weapon to defend yourself... you're going to jail.
And good luck with that "self defense" claim, while using an illegal weapon.

elder999 said:
California is strictly fixed blade in a sheath visible on the belt....which is funny, to me....View attachment 19981
Click to expand...

If it's in your pocket, and not visible, it's concealed.

If it's concealed, you're breaking the law.

elder999 said:
California is strictly fixed blade in a sheath visible on the belt....which is funny, to me...
Click to expand...

Interesting, Washington State is strictly folding knives. Fixed blades are illegal except for maybe in the forest.

kiai said:
True, but while they are the mindless enforcers of lawmakers who will destroy my life, they are my enemy.
Click to expand...

So instead you would prefer Police officers that enforce laws as they see fit and not as passed by democratically elected Legislatures and/or interpreted by an independent Judiciary?

That is a DANGEROUS road to go down because what laws to enforce and when is a recipie for abuse. I can't speak for the UK as you note specifically but the way you address your fear of being arrested for violating a law is via organizations like this Knife Rights - Home which have gotten knife laws changed at the State level to include laws forbidding individual Municipalities passing laws that contradict State Law.

On topic when on duty I carry a Gerber spring assisted knife in my left pants pocket (both because deployment from the right pocket is problematic due to my duty belt and for weapon retention purposes) and a Fox DART XT clipped to the pouch that holds the trauma plate of my best under my shirt.

Off duty I carry the DART in my right pants pocket.

Dirty Dog said:
You carry a knife that is illegal to carry in PA?
Click to expand...

A K-Bar isn't illegal to carry in Pennsylvania.

Justia US Law US Codes and Statutes Pennsylvania Code 2010 Pennsylvania Code Title 18 - CRIMES AND OFFENSES Chapter 9 - Inchoate Crimes 908 - Prohibited offensive weapons.
View the 2015 Pennsylvania Consolidated Statutes | View Previous Versions of the Pennsylvania Consolidated Statutes
2010 Pennsylvania Code
Title 18 - CRIMES AND OFFENSES
Chapter 9 - Inchoate Crimes
908 - Prohibited offensive weapons.
§ 908. Prohibited offensive weapons.
(a) Offense defined.--A person commits a misdemeanor of the
first degree if, except as authorized by law, he makes repairs,
sells, or otherwise deals in, uses, or possesses any offensive
weapon.
(b) Exceptions.--
(1) It is a defense under this section for the defendant
to prove by a preponderance of evidence that he possessed or
dealt with the weapon solely as a curio or in a dramatic
performance, or that, with the exception of a bomb, grenade
or incendiary device, he complied with the National Firearms
Act (26 U.S.C. § 5801 et seq.), or that he possessed it
briefly in consequence of having found it or taken it from an
aggressor, or under circumstances similarly negativing any
intent or likelihood that the weapon would be used
unlawfully.
(2) This section does not apply to police forensic
firearms experts or police forensic firearms laboratories.
Also exempt from this section are forensic firearms experts
or forensic firearms laboratories operating in the ordinary
course of business and engaged in lawful operation who notify
in writing, on an annual basis, the chief or head of any
police force or police department of a city, and, elsewhere,
the sheriff of a county in which they are located, of the
possession, type and use of offensive weapons.
(3) This section shall not apply to any person who
makes, repairs, sells or otherwise deals in, uses or
possesses any firearm for purposes not prohibited by the laws of this Commonwealth.
(c) Definitions.--As used in this section, the following
words and phrases shall have the meanings given to them in this subsection:...
...any blackjack, sandbag, metal knuckles, dagger, knife, razor or cutting instrument, the blade of which is exposed in an
automatic way by switch, push-button, spring mechanism or otherwise...
Click to expand...

So a double edge blade like a dagger, stilleto, traditional karambit would be illegal, as would a "trench knife" with a brass knuckle style hilt, and "push button" knives, but a K-Bar is actually okay as it is single edged. Hell you can actually walk down the street with a Katana or machete with how the statute is written as there is no length law at the State Level. The only thing we still debate around the Station, and even the DA hasn't been able to tell us, is whether or not "spring assisted" applies as it is not "automatic" and requires you to open the blade as you would any other folder.

Now this isn't to say that individual Municipalities don't have such ordinances however as PA does not have a preemption law for knife laws. As an example Philadelphia has this one...

(2) Prohibited Conduct. No person shall use or possess any cutting weapon upon the public streets or upon any public property at any time.

However according to associates who work in Philadelphia, as it is only a Summary Offense, they usually treat it as a secondary offense, or for the "interesting" guy walking down the street with a Katana on his back. They don't actively look for violators.

Thought this was worth a repost.
So, You Want To Carry A Knife For Self-Defense
B 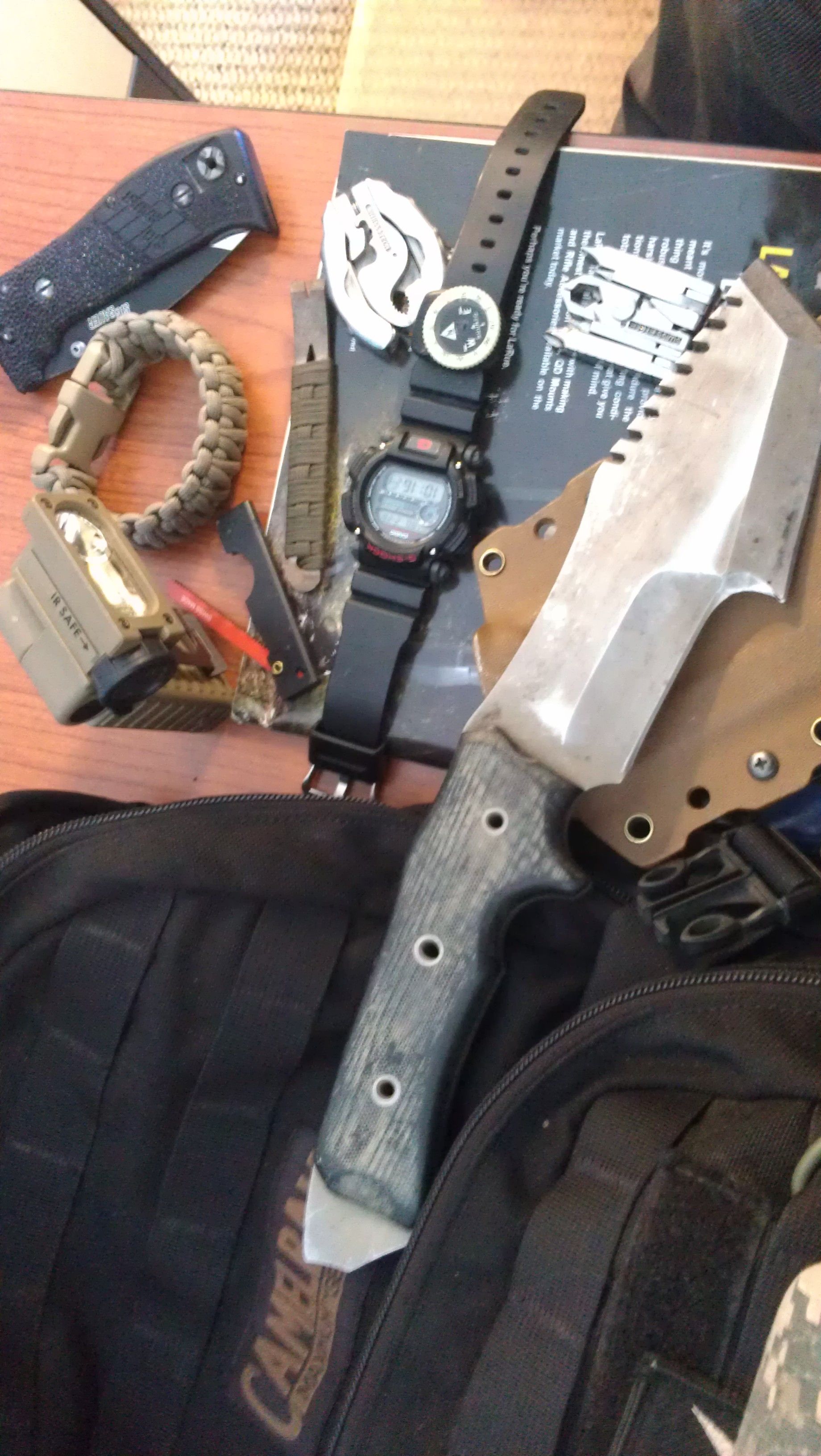 I couldn't type in the post because of the size of the picture but I rotate what I carry and I always try to carry in layers.
I can legally conceal folders, so I always stash them in last ditch spots like the appendix or small of the back.
I can legally carry a fixed blade if it is visible so I rotate between these...
CRKT Hisshou(Yah, its big but its essentially a short sword and capable of unspeakable things)
Mark Terrell USK(pictured above...good all around blade and absolutely bomb proof)
CRKT first strike (always liked them for their balance and durability)
CRKT obake(sneaky, very sneaky)
Hard Edge custom tanto(Kelly Ward is a master of his craft and makes a truly formidable piece)
GG&G battle hawk(There is nothing this tool cannot accomplish)

There are a few others but these are the most common...
I still have yet to pick a favorite but the battlehawk is probably the most practical because of its capabilities but the awkward bulk makes it a bit of a chore to situate in a vehicle and other confined spaces...I always accompany it with a knife simply because this thing is not very good at slicing or cutting.
You must log in or register to reply here.