The Singularity Is Near

Has anyone read it?
I just watched the Transcendent man and I have to say wow, very interesting.

This documentary and the book will either scare the hell out of you or give you tramendous hope depending on your perspective. I found it extremely hopeful and yet a little scary at the same time. So much can go wrong with the direction we are headed, but our current situation is so bad that it's hard to imagine it getting worse.

Combining man and machine?
I'm in.... 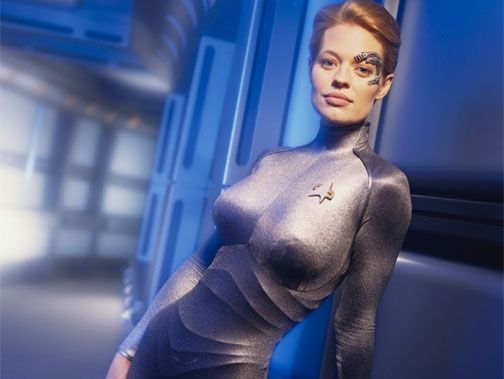 Could I just have her abs? I don't care if they look fake.
D

Carol said:
Could I just have her abs? I don't care if they look fake.
Click to expand...


Like an old friend used to say, "If you can touch `em, they`re real".

"The Singularity" commits a serious extrapolation error. Just because our technology is increasing at an exponential rate now, doesn't mean it will forever. It could level off, oscillate, or even reverse depending on what happens. I for one doubt the Singularity will happen, although it isn't impossible.

On behalf of everyone else who's wondering (hopefully there are some), what is this "the Singularity" of which you speak?

Sure, I can google it, but at the office and all.

I pulled this off of wiki, don't know if that is what is referenced or not. 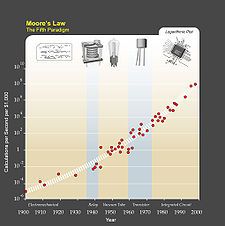 Kurzweil writes that, due to paradigm shifts, a trend of exponential growth extends Moore's law from integrated circuits to earlier transistors, vacuum tubes, relays, and electromechanical computers. He predicts that the exponential growth will continue, and that in a few decades the computing power of all computers will exceed that of human brains, with superhuman artificial intelligence appearing around the same time.


Many of the most recognized writers on the singularity, such as Vernor Vinge and Ray Kurzweil, define the concept in terms of the technological creation of superintelligence, and argue that it is difficult or impossible for present-day humans to predict what a post-singularity world would be like, due to the difficulty of imagining the intentions and capabilities of superintelligent entities.[1][2][3] The term "technological singularity" was originally coined by Vinge, who made an analogy between the breakdown in our ability to predict what would happen after the development of superintelligence and the breakdown of the predictive ability of modern physics at the space-time singularity beyond the event horizon of a black hole.[3] Some writers use "the singularity" in a broader way to refer to any radical changes in our society brought about by new technologies such as molecular nanotechnology,[4][5][6] although Vinge and other prominent writers specifically state that without superintelligence, such changes would not qualify as a true singularity.[1] Many writers also tie the singularity to observations of exponential growth in various technologies (with Moore's Law being the most prominent example), using such observations as a basis for predicting that the singularity is likely to happen sometime within the 21st century.[5][7]
A technological singularity includes the concept of an intelligence explosion, a term coined in 1965 by I. J. Good.[8] Although technological progress has been accelerating, it has been limited by the basic intelligence of the human brain, which has not, according to Paul R. Ehrlich, changed significantly for millennia.[9] However with the increasing power of computers and other technologies, it might eventually be possible to build a machine that is more intelligent than humanity.[10] If superhuman intelligences were invented, either through the amplification of human intelligence or artificial intelligence, it would bring to bear greater problem-solving and inventive skills than humans, then it could design a yet more capable machine, or re-write its source code to become more intelligent. This more capable machine then could design a machine of even greater capability. These iterations could accelerate, leading to recursive self improvement, potentially allowing enormous qualitative change before any upper limits imposed by the laws of physics or theoretical computation set in.[11][12][13]
The notion of the exponential growth in computing technology suggested by Moore's Law is commonly cited as a reason to expect a singularity in the relatively near future, and a number of authors have proposed generalizations of Moore's Law, such as computer scientist and futurist Hans Moravec who in a 1998 book proposed that the exponential growth curve could be extended back through earlier computing technologies prior to the integrated circuit. Futurist Ray Kurzweil postulates a law of accelerating returns in which the speed of technological change (and more generally, all evolutionary processes[14]) increases exponentially, generalizing Moore's Law in the same manner as Moravec's proposal, and also including material technology (especially as applied to nanotechnology), medical technology and others.[15] Like other authors, though, he reserves the term "Singularity" for a rapid increase in intelligence (as opposed to other technologies), writing for example that "The Singularity will allow us to transcend these limitations of our biological bodies and brains ... There will be no distinction, post-Singularity, between human and machine".[16] He also defines his predicted date of the singularity (2045) in terms of when he expects computer-based intelligences to significantly exceed the sum total of human brainpower, writing that advances in computing before that date "will not represent the Singularity" because they do "not yet correspond to a profound expansion of our intelligence."[17]
The term "technological singularity" reflects the idea that such change may happen suddenly, and that it is difficult to predict how such a new world would operate.[18][19] It is unclear whether an intelligence explosion of this kind would be beneficial or harmful, or even an existential threat,[20][21] as the issue has not been dealt with by most artificial general intelligence researchers, although the topic of friendly artificial intelligence is investigated by the Singularity Institute for Artificial Intelligence and the Future of Humanity Institute.[18]
Many prominent technologists and academics dispute the plausibility of a technological singularity, including Jeff Hawkins, John Holland, Jaron Lanier, and Gordon Moore, whose Moore's Law is often cited in support of the concept.[22][23]
Click to expand...

Carol said:
Could I just have her abs? I don't care if they look fake.
Click to expand...

Can I have her... (wait this is a family site)
You must log in or register to reply here.

What political books are you reading...

Never thought I'd see this in Massachusetts...

The Enduring Nature of Grief

Why the Reliability of Sources is Important

Open letter to the top .01% from a member of that club