The setting is very similar to the Apache vs Gladiator with a more woody area. Both meet at opposite ends and taunt each other. The Samurai is the first to strike as he shoots two arrows from his Yumi; one hits the Viking in his pectoral region, but is pulled out, and the other hits his helmet, dazing him for a second. The Viking charges at the Samurai in a berserker rage with his two throwing-spears. He throws both with one knocking down the Samurai. The Viking then approaches the Samurai with his great axe, only to be disarmed by the Samurai's superior technique with his naginata. The Samurai does a forward-thrust only to have it blocked by the Viking's chainmail. The Viking retrieves his axe, kicks the Samurai after parrying an attack, and then strikes him on the back. Unaffected, the Samurai picks up his kanabo and knocks the axe out of the Viking's hand, which causes the Viking to pull out his shield, only to have it (and possibly his shield arm) broken after swings from the kanabo. The angry Viking then charges the smaller warrior deeper into the woods, over a small bridge and knocks him off the bridge. The Viking unsheathes his longsword, and the Samurai his katana. Both clash, with the Samurai slowly backing up. The Samurai is able to strike the Viking twice, but the Viking is unaffected because of his chainmail. The Viking manages to get a strike in, that the Samurai almost dodged, but then the two clinch. The much stronger Viking then does what he did to the Samurai again in the bridge scene, but this time the Samurai is able to reverse and heave the Viking into a tree, which is followed up by a slash to his legs. The near-defeated Viking falls to his knees, and is stabbed in the neck. The Samurai turns him over to make sure he is dead, cleans and sheaths his sword, and walks away.

Although the Viking's fierce courage, brute power, and defensive versatility are impressive, the Samurai's technical skills, quickness, and arsenal of specialized weaponry gave him a narrow victory in the third-closest episode to date. This is the closest one-on-one fight yet, and the closest fight not involving modern weapons. This also one of the most disputed fights because of the conventionalism of some of the weapons. Namely the Naginata and Kanabo, both of which have little to historical evidence supporting their actual use by Samurai, the Naginata being largely used by women (namly Samurais wives) as a self defense weapon and the Kanabo being almost exclusively used by mythological Oni, and has no record evidence of it's use in actual battle.

Well as someone who practices JSA but who's family is probably heavy with Viking genes, I gotta go with the Vikings, but you're comparing apples to oranges. Viking swords were made very closely to how Japanese swords were made, a damn good blade. While the programs says the poorer Vikings used axes, the same held true in Japan, the poorer Japanese used **** blades.

Are the people wielding these weapons in these "tests" really the best examples to use? Because the Katana didn't cut through the chainmail...was it the sword or the wielder? Would a better swordsman have had a different result? Saying that one weapon was more effective than another based on the "tests" on this show is junk science IMO. Thats my issue with this series.

Having not seen the episode, why is it assumed that the Samurai has greater technical expertise than the Viking?
H

I saw this episode when it first aired. I thought based on their tests that the Vikings should have won...but like Ken I may be biased. They seemed to completely disregard that the katana failed to cut the Viking armor, and gave far to little weight to how effective the Viking shield was on offense and defense.

But, it's all entertainment, not science and not fact. Different people conducting the tests would probably result in very different results. I want a rematch!

And don't forget, Vikings fought in shield walls, not individually.

OK, if I hadnt trained in JSA for 11 years and if my minor at university wasnt history, and if I was 15 again, I would have loved this episode!!

I seen so much historical inaccuracy/ignorance, and crappy use of weapons, all within just the first 10 minutes, I have no other comments to make.
OP

And those reasons are why I brought it all up folks. Lets bust the tv fantasy.

Personally, I find mythbusters more accurate and methodical in their approaches.

I gave the edge to the Samurai as my belief is that they trained more for individual rather than unit combat. That, combined with superior weaponry would indicate a greater chance to win.
OP

I'm familiar with the katana and know of the Samurai's use of the bow (yumi). But as was mentioned in the description disagree with the inclusion of the Naginata and Kanabo.

Namely the Naginata and Kanabo, both of which have little to historical evidence supporting their actual use by Samurai, the Naginata being largely used by women (namly Samurais wives) as a self defense weapon and the Kanabo being almost exclusively used by mythological Oni, and has no record evidence of it's use in actual battle.
Click to expand...

The Oni being Japanese demons, I'm of course familiar with them from Urusei Yatsura, but never would have connected their weapon with Samurai. Seemed, unsophisticated.

So, the show gets 50% of the chosen weapons right. Dropping the "it looks cool on tv" choices, what else would a Samurai have actually carried into battle with him?

The one guy knows Kyudo I'll give him that!! The other guy has zero idea on how to use a shinken. Zero. He uses it like its an axe.

Sorry but you should never let a karate guy be your expert on swords, save that for an iaido, kenjitsu or kendo guy.

I actually wrote a list of the crap, but after ten minutes and 10 things on my list..i quit
H

Interestingly, Viking swordsmiths used similar techniques as the Japanese did for making the katana. Both folded and welded different grades of steel, having a harder edge than the core of the blade.

The samurai were archers first and foremost. Then firearms and slings. I read a paper by Karl Friday (?) years ago, on EJMAS (?). At the percentage of deaths on a Japanese battlefield, swords were in the range of 5%. Arrows, rocks and musket balls were 80% +. The sword is a close range, last resort weapon. Samurai werent stupid, you kill people from a distanceits much safer that way.

Bob Hubbard said:
Dropping the "it looks cool on tv" choices, what else would a Samurai have actually carried into battle with him?
Click to expand...

Most Samurai in the classic military sense would have had a bow and/or Sword.
OP

So, would a samurai use a katana, or a shorter blade? I mean I've seen tachi · nodachi · katana · wakazashi · gunto · kodachi.


I wasn't aware the vikings were that skilled in metallurgy. I'd always thought of them as bronze age not iron age warriors.

Depends on what historical period we are talking about.

Wikipedia has a pretty concise explanation of Japanese Sword history and development.

The original weapons of the Samurai were the Yumi (bow) and Ya (arrow). The original term for the way of the warrior was Kyuba no michi (way of the mounted archer), and the term for a warrior family was kyusen no ie (bow and arrow family). As time went on, archery remained important, but foot soldiers came to replace a lot of the cavalry. Their most common weapons were polearms, such as Yari (spears), Naginata (sorry, Bob, but if we're talking battlefield samurai, this is far more likely than a sword), even in very rare cases huge staves such as the Kanabo, or Tetsubo. Others included Kade, a form of long handled rake, very long handled Kama (sickles), and the incredibly rare very large sword (Odachi, sometimes termed Nodachi, although the specific term used was relevant to different weapons in different periods of history).

The sword was never a major battlefield weapon, especially not the katana. It's origins come from a utilitary smaller blade worn with your long sword (tachi) called an uchigatana (striking sword). When Japan entered into the peacetime of the Edo period, that was when the katana really started to take off, as it became part of the everyday wear of the samurai.

When it comes to the "samurai martial arts", even such systems as Katori Shinto Ryu, which centres it's teachings on the sword, it is highly doubtful that the sword was indeed the primary weapon used by the founders/practitioners in battle. Instead, it was used as a method of teaching strategies and tactics to high level samurai, who most likely would occupy a "general" type position, and not actually be involved in the actual battle. Most martial arts are like this, which is the equivalent of a boot camp (teaching only basic aspects) being for the common soldiers (regular soldiers, not actually learning a martial art), and Officer training being for the planned commanders and so on (that would be the equivalent of the martial art training in modern military).

So the sword was not really ideal, depending on when the samurai was supposed to be from. Remember, we're dealing with about 1000years of samurai history that we could have taken this guy from, which kind of invalidates their entire approach if that is not taken into account...

By the way, vikings used bows a lot too, certainly in large battles both on land and at sea. Some famous vikings were known for their archery skills and how their arrows would pierce shields and mail. 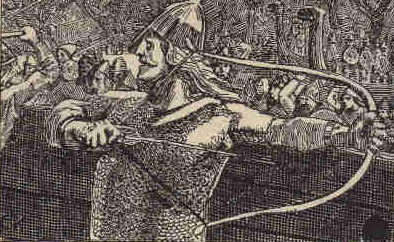 Einar Tambarskelver, one of the sharpest of bowshooters, stood by the mast, and shot with his bow. Einar shot an arrow at Earl Eirik [...] Then said the earl to a man called Fin, [...] "Shoot that tall man by the mast." Fin shot; and the arrow hit the middle of Einar's bow just at the moment that Einar was drawing it, and the bow was split in two parts. "What is that," cried King Olaf, "that broke with such a noise?" "Norway, king, from thy hands," cried Einar. "No! not quite so much as that," says the king; "take my bow, and shoot," flinging the bow to him. Einar took the bow, and drew it over the head of the arrow. "Too weak, too weak," said he, "for the bow of a mighty king!" and, throwing the bow aside, he took sword and shield, and fought Valiantly.
J

I don't think a lot of this show either. It looks like a bunch of pseudo science put into a computer and wala, they have the predictive outcome. I thought the Samurai vs. the Viking outcome was a bunch of crap, and I believed the Viking would have won through superior size and strength, as happened when U.S. Marines fought the Japanese in hand to hand combat in World War II. I think the show is entertaining, but essentially a bunch of crap.
You must log in or register to reply here.

B
The Official "Samurai vs Vikings thread"
2