Just got an email from the college I teach at, that the University police dept is offering RAD classes for women. Form what I understand it's a 9h minimum, redman suit type of thing. Just out of curiosity: does anyone have experience with that program and does it offer anything useful and realistic?

I would say good if you could already fight.

I agree with drop bear. There is only so much physical self-defense that a person will be able to do without properly training how to throw a punch

I used to like the Redman suits but I'm now having second thoughts about it. I'm actually thinking that it has the potential to make things worse in terms of self-defense. People in the Redman suits tend to just take a beating and they don't make the effort to avoid or stop the victim's attacks. This for me is a huge problem because now the victim doesn't know what incoming punches looks like. It's also more difficult to fight off an attacker who is going to punch you and rough you up anyway before they do what they want.
This

This. Notice when the red man starts punching back. He's not able to block the punches. You can actually hear someone yell hands up.

Unless the guy in the RedMan Suit attacks in a way that make your brain think "oh sh...t" then the training is going to be one sided.

Self Defense training without a resisting aggressor is pointless. Though, it will take much longer to teach a student how to properly react and fight for survival against a real attacker. Beating on an invincible, non-resisting opponent is a huge confidence booster. Is that why the women like it?
OP

I kinda wish I was female (just for that occasion) so I could take the class and see for myself. It's cheap and offered here by campus police for students and staff.

TieXiongJi said:
Self Defense training without a resisting aggressor is pointless. Though, it will take much longer to teach a student how to properly react and fight for survival against a real attacker. Beating on an invincible, non-resisting opponent is a huge confidence booster. Is that why the women like it?
Click to expand...

Just basing my comments on the female students I train with. The female students have it in their minds that "They don't want to hurt someone" I'm not sure why because as beginners many of the women aren't as strong as they think they are. So the RedMan suit may make them feel more comfortable with striking back. If that's what they are doing then for me personally I would rather that a woman know that her attacks are weak so that she can do 1 of 2 things. She can either train to make her attacks stronger, or she can factor in the reality that she has weak attacks and plan her self-defense options in the context that she has weak attacks.

For the longest the women at my school thought and believed that they could hurt some of the conditioned students. That perception quickly went away, when they got hurt after hitting one of the conditioned students. They were shocked to discover that they could get hurt just from hitting someone, even if that person doesn't hit back. The conditioned students actually warn new students "Don't hit us hard because you'll end up hurting yourself when you hit us." Now the women are more aware of this, they do conditioning, and they are careful about how they are attacking. Most importantly they also understand that it takes more to hurt a person than what they originally thought.

This is what I've seen mostly from female students.
She's too worried about hurting the guy. Had she been in a real fight against another woman she would have attacked with more effort and force than that. Because she's not attacking with that amount of force, she will never know if she actually punch strong enough to hurt an attacker, be it a man or another woman.

I don't think it's pointless, we're just able to see the limitations of it because of what we do. Teaching people that it's okay to fight back is a huge leap for some. It could potentially save a life. I'm all for it.

Who told you women like hitting someone in a redman suit? Who told you it gave them confidence? If you think women are silly enough to equate being able to hit a person in a redman suit with fighting off a rapist then you are very much mistaken. I think you have little to no experience teaching people realistic self defence ( which really needs to be longer than 9 hrs)


JowGaWolf said:
Had she been in a real fight against another woman she would have attacked with more effort and force than that
Click to expand...

Not necessarily, and it would depend on what the fight was about. I've seen women fly at men, without being training in anything, and cause real damage. I've seen female fights that you'd just laugh at, seen men fight like that as well. Those are good actually easy to break up because they didn't really want to fight in the first place.

TieXiongJi said:
Self Defense training without a resisting aggressor is pointless. Though, it will take much longer to teach a student how to properly react and fight for survival against a real attacker. Beating on an invincible, non-resisting opponent is a huge confidence booster. Is that why the women like it?
Click to expand...

Yeah pretty much why everyone likes it. All reward no effort.

I was in a fist suit at one point there. Not sure if the cost of the suit is worth the benifits. 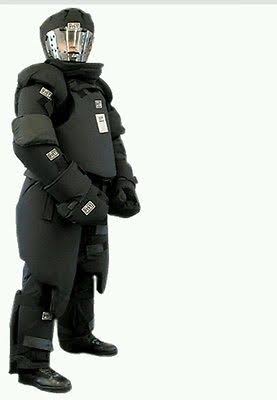