A well duh moment &#8211; Santi Shi training
I was thinking about the various ways I have been shown to stand in Santi, which basically means 2 different ways &#61514;

I was standing in Santi this morning and I generally just stand as long as my knees can stand, which is about 5 minutes per side at the moment (that I s coming form not being able to stand in it at all by the way) and I switched like I was shown and then it hit me :idea:

Why not just do piquan (2x3 or 3x4) and at each santi stop and stand for whatever I can stand (not wanting to push it due to the knees I chose 2 minutes), The changes though from right to left I did with power, then stopped and stood in Santi. Even did the turn with the kick and tried to hold it on one leg for 2 minutes (fail). I've been doing this for a few years and I just figured this out :duh:

I have to tell you that was awesome and after what was roughly 14 minutes I was sweating more than I do after 20 minutes of DDP yoga. But you should also take into account I am old, beat-up, injured and out of shape too.

For those that do not know this is Santi Shi 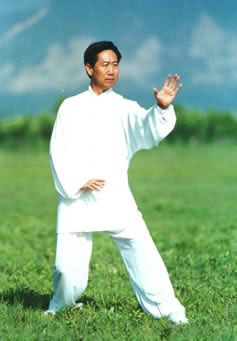 On a side note, I have now seen variations of Piquan, Bengquan, Hengquan and possibly Paoquan in Sun taijiquan
Last edited by a moderator: Nov 24, 2014
You must log in or register to reply here.

"The Most Beautiful Tai Chi Champion"

Finally... and its about time too