I copied and pasted a post from my Admin boss from another forum (I am sure she won't mind)
Those are the things that tend to fly in under the radar, since everybody is looking at ZOH MEE GOSH Cain is asking for BJs, Perry drew a blank and those evil hippies want to hold Wall Street accountable for the damage they did.

I only skimmed the post and did not follow any link, but it seems that this would effectively kill the 'world wide' in the web.
Not to kid ourselves, there are already many restriction in place you just don't hardly ever see unless you go abroad and try to access websites from there.
Youtube has content that is censored and not available in some regions.
At one point I was unable to access my forums on proboards from Europe by typing in the url, only when I followed links I was able to get on. Really odd.

I think so far we don't even know what on the web we are denied the pleasure of viewing. Somebody slapping a copyright on something, or blocking zones and areas.
(the post looked so much longer on the other forum...)

but there are some big $$ issues mentioned, maybe there is something to it?


There are two bills that are flying through congress, the PROTECT IP bill (S.968) in the Senate and the much worse Stop Online Piracy Act (H.R. 3261) in the House. Supported by groups like the MPAA and Big Pharma, the gist is to block "rouge" websites that infringe copyright from being accessed by those in America. As well as block the funds and promotion to those websites, like online advertising and links to those domain names through search engines or user-written pages.

The bills' execution is horrendous and has far-reaching implications, however, that can censor an entire website because of a single infringing link or post. Websites that have user-generated content like Tumblr, Youtube, Twitter, LiveJournal, Facebook, Flickr, DeviantART, even regular forums in general, all of these type of websites are in danger. Currently sites like those are protected by the DMCA, which created a "safe harbor" that protects them from liability as long as they remove copyrighted material when asked by the rights-holders. But with SOPA, these websites would be liable for everything their users post.

In addition, there's an immunity clause for search engines, ISPs, and various name registers to preemptively block or cut off funds to any website as long as they have reasonable belief that it's "infringing" on someone's rights. Not to mention the total lack of due process for websites that have been deemed "rogue" -- instead of innocent until proven guilty, it's shoot first and only ask questions later if you can afford the defense lawsuit.

There's also an issue with the DNS coding to make this censorship possible, creating fears from the tech industry that this will make the internet less secure and stable. As well as potential backlash from other countries if America starts blocking access to foreign websites, or just the added bonus of joining the ranks of countries that already censor their internet like China and Iran.


There was a hearing held this morning regarding SOPA, with witnesses speaking on behalf of the MPAA, Big Pharma, and Mastercard among some others, but nearly all opponents to the bill were prevented from attending it. The only opponent that spoke was from Google, and according to the official House of Representatives write-up, is being painted as the bad guy for having refused to remove "rouge" website links from their search results. There were no tech/internet engineers present at the hearing, and from the EFF Live tweets, it seems like most of the proponents didn't know how DNS even worked [SUP]link[/SUP], or that the internet works fine in countries that censor it[SUP]1, 2[/SUP].

The hearing was not aired on tv or radio, but there was a live webcast of it. However the people in charge of that were so inadequate that the stream actually went black for most of the hearing, only returning near the end of it.

You can find some live tweets from the hearing via EFFLive twitter feed.


Other links on this issue include:

A list of organizations and people that oppose SOPA, at CDT.org

The Library of Congress bill summary for SOPA, and PROTECT-IP
Click to expand...

Heavy stuff for a Saturday night. Will take a fresh look when I'm done adventuring tomorrow

Here are a bunch of people who don't understand DNS and will try to regulate it....le sigh.... 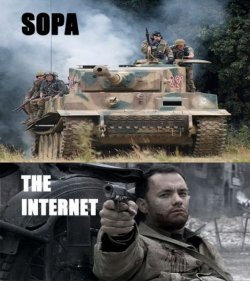 Not to mention the hypocrisy that goes with it!
View attachment $SOPA violator.jpg
OP

Ah, the IRONY
You must log in or register to reply here.