Hi all,
I'm in a rural area, and the nearest city that offers tai chi is 2 hours away. I did find an instructor, but he said he teaches Shibashi Qigong, Chuan/Yan and Shin Tora Do/Chi. I have been able to find information on Shibashi qigong, but I can not find anything on Chuan/Yan or Shin Tora Do/Chi. From what I understand, these are styles of tai chi. I'm baffled because shin tora do is definitely Japanese, whatever it is. Anyone familiar with these? Thanks.

Anthony von Sager is most likely the creator for shin tora do ( the way of the tiger heart? )
The shibashi 十八式 is a modern style of qigong. If the teacher knows about sanbao he is good if not then I wouldn't bother with him.

Well, from what I've found, "Shin Tora Do" is a mixed martial arts system founded by Anthony von Sager, who is a world-renowned (although I've never heard of him) Martial Artist and Athlete:

As for the art itself, I can't find any information on it or anyone who claims to teach it. As for Chuan/Yan, the only thing I can find that it might be is "Yuan-Chi Tai Chi Chuan":

If I might ask, what are your reasons for wanting to learn Tai Chi? I ask because it would seem, looking at the styles listed, that the instructor focuses primarily on promoting good health and longevity above all else, through the extensive use of moving meditation and Chi flow. That's fine but I know it's not for everyone, and if you plan on travelling 2 hours for every class, it might not be worth it for you.

Yuan taijiquan looks to be new age taoist tai chi society you probably could do some online thing and it would be better or at least the same.

oaktree said:
Yuan taijiquan looks to be new age taoist tai chi society you probably could do some online thing and it would be better or at least the same.
Click to expand...

Yep. This is a clue: "Tai Chi Chuan is literally the All-Pervading Ultimate Fist. " ( About Tai Chi – Yuan-Chi Tai Chi Chuan ) This shows that the writer of the piece knows squat about taijiquan and has mistranslated "taiji" for the purposes of self-aggrandizement. "Taiji" is better translated as "first polarity" or "most opposites." It refers to the Taoist metaphor of the constantly moving forces between yin and yang. The polarities are opposites: yin is often passive, and yang is often active. Taiji has nothing to do with "best," or "greatest.""Ultimate" = "polarity" or "extreme."

I'd avoid the group. It seems to cater to western orientalism, where all things Eastern are "other:" either inscrutable or magical.

Living in a rural area can be tough. For training, maybe take whatever you can get. And good luck, bro.

Which city are we talking about, Jac? There may be other options that would be easier for you to practice outside of class.
OP

Thank you. Whenever I hear of styles that are not Chen, Yang, Wu, or Sun, I start to wonder. There's a lot of woo woo out there. I did find one other guy who teaches. He admits that he is an advanced student and still learning, though. He teaches Cheng Man Ching style. I've looked into it, but I'm not sure what to think. After searching long and hard, these are the only two instructors I have found. In the meantime, I am using Dr. Lam's videos, but I feel like in person instruction would help, even if it is just the basics.

The Cheng man Ching form is a solid form and often one's introduction to taijiquan and yang style in general. Dr. Lam's videos are OK I have met and spoken to one of his senior students they are more focused on health then say any martial application.
OP

mograph said:
Yep. This is a clue: "Tai Chi Chuan is literally the All-Pervading Ultimate Fist. " ( About Tai Chi – Yuan-Chi Tai Chi Chuan ) This shows that the writer of the piece knows squat about taijiquan and has mistranslated "taiji" for the purposes of self-aggrandizement. "Taiji" is better translated as "first polarity" or "most opposites." It refers to the Taoist metaphor of the constantly moving forces between yin and yang. The polarities are opposites: yin is often passive, and yang is often active. Taiji has nothing to do with "best," or "greatest.""Ultimate" = "polarity" or "extreme."

I'd avoid the group. It seems to cater to western orientalism, where all things Eastern are "other:" either inscrutable or magical.
Click to expand...

I'm new to this, but I thought Taiji meant "supreme ultimate" or something along those lines--as in the combined forces of yin and yang make up the ultimate. The way I understand it, yin and yang are not opposing forces, at least not completely, because they both have a little of the other in each of them, and they both transition into the other. For example, take day and night. Day transitions to night transitions to day. They are not opposing, but rather two different sides to one whole--like balancing scales, they exist to keep the balance of the whole. Like I said, though, I'm just starting out, so I may not have an accurate grasp of the concept.
Last edited: Apr 14, 2017

Nope, sorry. I cannot state any more clearly that "ultimate" in this context has nothing to do with greatness, mostness or value. It is about polarities, or ends. Remember that penultimate means next-to-last, or next to the end? Ultimate means the end, the extreme. For example, in this list, A B C D E F G H I J K, the "ultimates" are A and K. It doesn't mean they're any better than the other letters: they are simply the ends of the list.

(As for being opposing, or two halves of a whole, that's the same concept when there are only two things in the model. I don't mean that they hate each other or actively try to destroy each other, but if you only have two things, they must sit in positional or definitional opposition to each other. They are only not in opposition if there is a third thing present.)

Wu chi, or wuji, (see second diagram below) means no opposites, no extremes, no polarities, no ultimates (where "ultimate" = "end"). Wuji is represented by a plain circle. This, according to Taoist cosmology, is the theorized beginning of all, where everything is the same and nothing is differentiated. All is one bowl of red jell-o, with no marshmallows in it.

The next stage is taiji (tai chi), where opposites begin to form, but are constantly changing from one (yin) to the other (yang) and back. The yin-yang diagram we all know (below) is taiji. In the taiji diagram we see a drop of yin within the zone that is mostly yang, and vice-versa: this drop allows one to change to the other. Without that drop, the zone will stay as it is.

Food-wise, this is a magic bowl of ice cream: Today, the bowl is mostly chocolate with a chunk of vanilla, but the vanilla can grow while the chocolate shrinks, until it is mostly vanilla with a chunk of chocolate. Or check out the animated GIF below. The dot grows until it takes over that space -- but note that there is still a dot of the other within. This is necessary for taiji -- there is always a bit of one extreme within a zone that is primarily made up of the other extreme.

One martial application of this is when you are relaxed, you stay lively in case you need to move: you are mostly yin, but you have a drop of yang in you ready to go. Or you let the opponent in (yin), but you arrange it so that you can send him back out again (yang). Or you send him out (yang), but as you push/press/whatever, you are sensitive (yin) to his changing his focus/weight/position so that you can react. Never be all yin or all yang.

Wuji is when you stand on both feet before shifting your weight to one foot or the other. Once you turn for "grasp bird's tail," you are then in a state of taiji, shifting weight and focus from one foot/side/hand to the other as you go. You are in a state of taiji until the end of the form.

Note that yin does not contain yang or vice versa: instead, a zone, area or state of being that contains mostly yang also contains some yin, and vice versa. It's like saying that one bowl contains mostly vanilla ice cream, but also contains a bit of chocolate: vanilla is still vanilla, and chocolate is still chocolate. Vanilla does not contain chocolate or vice versa: the bowl contains pure vanilla or pure chocolate in varying proportions. They do not mix into gray ice cream in this analogy. In taiji, they must still be differentiated as black and white, but the state or container can change in the proportion of each which it contains. 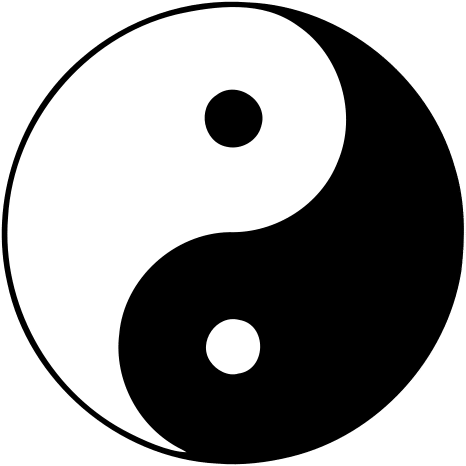 Do any of you have experience with Loretta Wollering's tai chi at www.internalgardens.com? I thought some of her videos were interesting, but at the same time I'm kind of wary because she is really pushing her product on her website.
You must log in or register to reply here.

A Funny Thing Happened on the Way to the Forum