I have just started learning one of these forms this Summer. The instructor says there are 5 forms, or elements. So far, I have found it a little different from anything I had seen before.

Does anyone know of any books or DVDs that would be useful references? Many thanks - I am only a beginner at this. 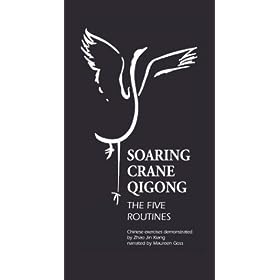 I just joined MartialTalk while following a link to Soaring Crane Qi Gong, and saw this inquiry.
Thank you, martial arts practitioners, for letting me join your dialog. I am not a practitioner of a martial art now, although 30 years ago I studied Okinawan Gojuryu. Today I practice Soaring Crane Qi Gong. Although not a martial art, it strengthens your qi and your core and is a healing practice useful for maintaining health as well.

I am a 65 year old woman still interested in the aspects of martial arts that pertain to internal qi development. I also am interested in nei gong. If the person who asked about Soaring Crane Qi Gong still wants to discuss it, or if anyone else would, I would like to as well. If your questions are about qi gong and martial arts, I would be interested to read about it, although I wouldn't be able to offer anything.

I just saw the reply to this inquiry. I learned Soaring Crane Qigong from the video/dvd and book by Master Zhao, Jin Xiang, originator of the practice. It is available from Amazon. Make sure you get the most recent video/dvd from 2006.

I have practiced it alone and also at times with others who know the practice.

I practiced an Okinawan gojuryu karate style 30 years ago and sustained a back injury because I had a severe spinal deformation that I was born with but did not know about. I did not continue with martial arts. My husband became a black belt and an international instructor and then studied tai chi with Cynthia Ming. About 14 months ago, after I was diagnosed with stage four lung cancer, I began studying Soaring Crane Qigong. Between western medicine and eastern practices and energy work I was cured. I do 45 minutes of Soaring Crane in the morning (two sets of the five basic exercises) and 20-25 at night (one set). I do standing meditation two or three times a week. Although I started Soaring Crane specifically to boost my immune system and fight cancer, I immediately began to experience other health benefits. The arthritic pain in my knees and hips totally disappeared. Trigger fingers in both my left and right hand stopped triggering. Constant muscle and joint and bone pain from the medication Arimidex (which I take because I had breast cancer five years ago) disappeared. I continue the medication pain-free.
When I underwent months of chemo for the lung cancer I was told I would be unable to work, I would be too weak and too nauseous. I was given anti-nausea pills (and suppositories, in case I threw up the pills). I worked full-time throughout treatment, never took the anti-nausea medication, never became nauseous, and never felt overcome by weakness (although I was not as strong as I usually am). Afterward, I was even stronger. I attribute this to the qigong and to energy work.

I know martial arts practitioners sustain contact and stress injuries. Moving blocked qi through the meridians through a practice like Soaring Crane might help with bone, muscle, and joint pain, as well as developing
over-all health.

A good friend of mine told me last Friday that she has been diagnosed with cancer for the third time. This time it is too widespread for surgery. The oncologist had previously told her in a survivors group that the internal arts such as Tai Chi and Qi Gong have many benefits and that she should continue them. Since we work together, we are able to run through some exercises during lunches or breaks on most days. I hope I can help her beat this for a 3d time.

I haven't had a class myself in months - I see you studied Okinawan karate, well I am too busy running my daughters to their classes in that. They are at the same time as the Soaring Crane classes.

Stay well and enjoy your time here.
You must log in or register to reply here.

Is Anything Less than 103 Forms in Yang Style Considered Watered Down and Less Martial?

What is your qi gong practice?