Recently, I noticed that my trusty old Spyderco Endura was starting to feel its age. It was developing some play in the locked postition
(both lateral and vertical) that was more extensive that what I'm comfortable with. While I like the Endura and consider it to be a great
"bang for the buck" knife, there are a few things that I'm just not crazy about (handle shape, blade to handle angle, etc.). As a result, I
decided it was time to try something different...the search for a new knife was on.

My main criteria was that the knife be roughly the same size as the Endura (4" blade), that it have metal liners (for durability), a good
lock like a frame-lock or Axis lock (or equivalent), and that the handle would be comfortable in a variety of grip styles (forward,
reverse, edge in or out).

After doing some looking, I narrowed my choices to either the Cold Steel Recon 1 or the SOG Spec-Elite I as both of these knives
had the features I wanted and they are both reasonably priced. While looking for around for the best deal, I stubled across a
Spec-Elite II for a great price (good enough that I could make my money back if I didn't like it) and decided to give it a try even though
it was bigger that what I originally wanted. After receiving it and playing with/carrying it for a few days, I'm glad I decided to go with
this one. 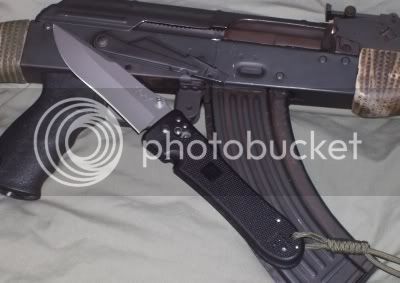 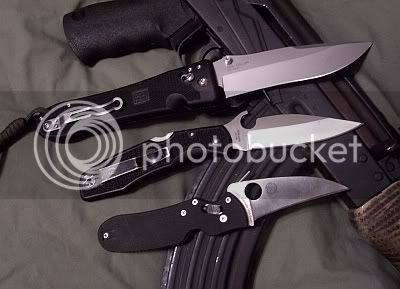 As you can, this thing is a hoss!
However, due to a very well-executed design, it doesn't handle like the monster that it is. I've handled a variety of big folders in the
past but didn't really care for some of the more common ones. I find Cold Steel's offerings like the extra-large Voyager, or Gunsite to
be unconfortable and insecure due to the thin handles. Money was also a factor so, as nice as they are, I didn't want to shell out the
cash for a Blackwood Skirmish or Ruckus (not right now anyway). The SOG feels a lot better in my hand than the CS models and is
1/2-1/3 of the price of the Benchmades.
Overview...
The ergonomics of the handle are great and due to the "neutral" design, it feels very comfortable in any grip. 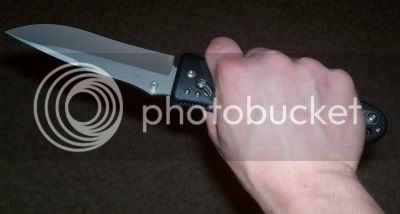 The balance-point is right behind the thumb-stud cutout on the handle. This, at least for me, makes it feel very light and fast in the hand
despite its weight.. Also, unlike some designs, the knife feels very good in the closed position. Because of the shape of the handle it
would be a good fist-load. Also, since it protrudes from the fist on both ends, it would be excellent for "kubaton type" strikes for those
situations when you may not have time to deploy the blade. 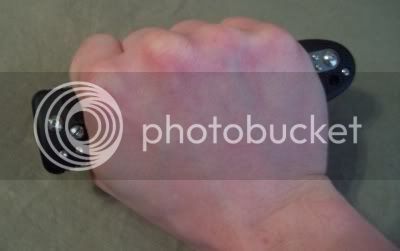 I was pleasantly surprised at how secure this knife feels in the hand. When looking at the handle from the top, you can see a slight swell
at either end, tapering toward the middle. This aids in preventing the hand from sliding off in either direction. There is also jimping on
both the top and bottom of the handle near the blade.

The pocket-clip is set up for tip-up carry and is not reversible (no option for tip-down), however, it can be moved to the other side to
accomodate the southpaws out there.
The clip is well positioned; the knife rides high enough to obtain a good grip, yet not so high that it is any more conspicuous than other,
more "normal" sized folders.

The lock is what SOG referrs to as the "Arc Lock." It appears to be very similar in operation to the Benchmade Axis. Between the
lock and the metal liners, I'm confident that this will be a very durable knife. I like this lock design because it makes for a very smooth
opening. In fact, this knife practically begs for a kinetic opening. Between the smooth lock and the weight of the blade, all it takes is a
little twitch to get the thing open. 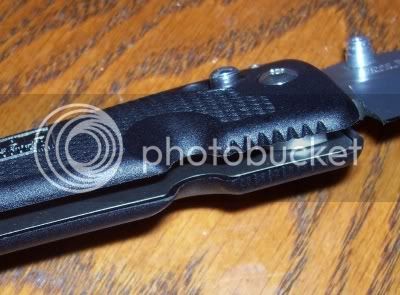 On to the blade...
At 5" long, 1 5/8" wide (at the widest point), and 5/32" thick, this is a pretty substantial piece of steel.
I like the recurve style blades due to their great slashing capability. I also personally like the fact that the point is basically in line with
the centerline of the handle which makes it good for thrusts.

The blade is equipped with dual thumb-studs and also features jimping on the spine to rest your thumb if you want to "choke up" on the
blade a little. One thing that is just "icing on the cake" with a new knife is when it comes out of the box with a good edge. This one was
capable of shaving right out of the box.

The only thing I do not like about the knife is that it uses three different types of screws. The main pivot screw and the main
pocket-clip screw are T-10's, the 4 little bitty ones along the top of the handle are a smaller size (maybe T-7), and the two smaller
screws on the pocket-clip are Phillips-head. I don't understand why knife makers persist in doing stuff like this.
At any rate, this is a small gripe...Considering that's the worst thing I can say about this knife, I'd say that's pretty good.
This is definately not a knife for those that won't carry anything larger than a Kershaw Scallion. However, if you appreciate a big knife,
you might want to give this one a look. They do have a smaller version, the Spec-Elite I (4" blade). I may pick up one of these myself
for times when I'm in a state that may not allow this one.
Overall, I'm very pleased with this knife. There is just something reassuring about having a big heavy blade readily available.
OP

A few more pics that it wouldn't let me post a minute ago...(I got carried away playing with the camera ) 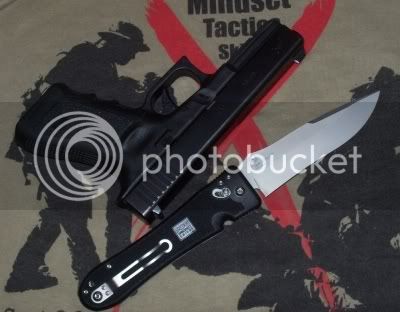 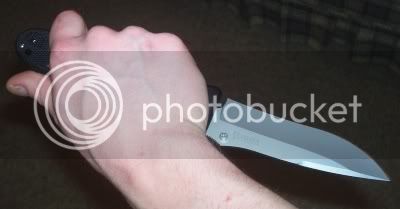 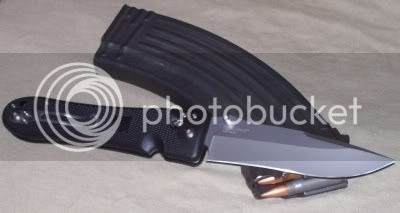 Congrats on the score, and thanks for the review. I may have to pick one up as well .

Nice knife and nice review. I have handled one myself and thought it felt great. The knocking point on it for me is that it would not be legal size in the State of Michigan! Still it is a great knife for the money!

Brian R. VanCise said:
Nice knife and nice review. I have handled one myself and thought it felt great. The knocking point on it for me is that it would not be legal size in the State of Michigan! Still it is a great knife for the money!

re. the legality thing, fortunately, Missouri has decent CCW laws...knives (including fixed-blades and double-edge, etc.) are covered with your permit.
You must log in or register to reply here.

What do you EDC?

Choosing a Self Defense Knife
3 4 5