By Parisa Hafezi and Roman Kozhevnikov Parisa Hafezi And Roman Kozhevnikov Wed Jun 9, 2:41 pm ET
TEHRAN/DUSHANBE (YahooNews/Reuters)EXCERPT:
 Iran dismissed new U.N. sanctions on Wednesday as "valueless," vowed to continue its nuclear work and warned it may reduce cooperation with the United Nations nuclear agency. President Mahmoud Ahmadinejad said during a visit to Tajikistan: "these (U.N.) resolutions have no value...it is like a used handkerchief that should be thrown in the waste bin."
"Sanctions are falling on us from the left and the right. For us they are the same as pesky flies...We have patience and we will endure throughout all of this," he said in comments in Farsi translated into Russian.
Iran says its nuclear programme is for producing electricity and other peaceful uses and has repeatedly refused to bow to international pressure to halt uranium enrichment, which can provide fuel for power plants and material for arms if refined much further.
In Vienna, Iran's envoy to the International Atomic Energy Agency (IAEA) described the U.N. vote as "another dark chapter of mistakes, miscalculations" and said he hoped the major powers would reconsider their "mistakes."
Ali Asghar Soltanieh added: "We will continue without any interruption our enrichment activities ...(they) will not be suspended, even for a second."
END EXCERPT
I agree with Ahmadinejad. Sanctions don't work on Iran, I learned this, when everyone with half a brain should have, you remember the Carter Administration...

The comment that I heard that made sense to me is that the sanctions are like sentencing a hermit to house arrest. Big deal.
OP 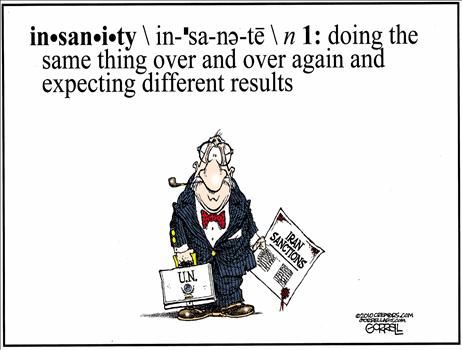 Don you got this one absolutely right. Now remind me again why right-wing conservatives have supported sanctions against Cuba for the last fifty years. Was that so that Fidel Castro (and now his brother, Raul) could similarly blame the horrendous failure of his regime on the US and maintain his death-grip on power all this time?

This sanctions thing has always been so much more about political posturing than getting results.

Saudi Arabia has conducted tests to stand down its air defences to enable Israeli jets to make a bombing raid on Iran&#8217;s nuclear facilities, The Times can reveal.

In the week that the UN Security Council imposed a new round of sanctions on Tehran, defence sources in the Gulf say that Riyadh has agreed to allow Israel to use a narrow corridor of its airspace in the north of the country to shorten the distance for a bombing run on Iran.

To ensure the Israeli bombers pass unmolested, Riyadh has carried out tests to make certain its own jets are not scrambled and missile defence systems not activated. Once the Israelis are through, the kingdom&#8217;s air defences will return to full alert.

&#8220;The Saudis have given their permission for the Israelis to pass over and they will look the other way,&#8221; said a US defence source in the area. &#8220;They have already done tests to make sure their own jets aren&#8217;t scrambled and no one gets shot down. This has all been done with the agreement of the [US] State Department.&#8221;

Sources in Saudi Arabia say it is common knowledge within defence circles in the kingdom that an arrangement is in place if Israel decides to launch the raid. Despite the tension between the two governments, they share a mutual loathing of the regime in Tehran and a common fear of Iran&#8217;s nuclear ambitions. &#8220;We all know this. We will let them [the Israelis] through and see nothing,&#8221; said one.

The four main targets for any raid on Iran would be the uranium enrichment facilities at Natanz and Qom, the gas storage development at Isfahan and the heavy-water reactor at Arak. Secondary targets include the lightwater reactor at Bushehr, which could produce weapons-grade plutonium when complete.

The targets lie as far as 1,400 miles (2,250km) from Israel; the outer limits of their bombers&#8217; range, even with aerial refuelling. An open corridor across northern Saudi Arabia would significantly shorten the distance. An airstrike would involve multiple waves of bombers, possibly crossing Jordan, northern Saudi Arabia and Iraq. Aircraft attacking Bushehr, on the Gulf coast, could swing beneath Kuwait to strike from the southwest.

Passing over Iraq would require at least tacit agreement to the raid from Washington. So far, the Obama Administration has refused to give its approval as it pursues a diplomatic solution to curbing Iran&#8217;s nuclear ambitions

I don't know if I should like the spirit of co-operation or detest the use of Israel to do what the rest of the West apparently lacks the balls to do.
C

I don't know if I should like the spirit of co-operation or detest the use of Israel to do what the rest of the West apparently lacks the balls to do.
Click to expand...

I detest the use of Israel to do what the rest of the Arab world lacks the balls to do. Then they can pile up on Israel for 'invading' Iran.

Its strange, we allow North Korea to possess nuclear weapons, Pakistan to get them a few years back, and even South Africa decades ago. I would argue that North Korea, while very, very localized regionally, is a bigger threat proportionately, to world peace, then Iran. Yet we did, and do nothing about their nukes. Pakistan actively helps the Taliban in Afghanistan, has an unstable democracy and has nukes and nuclear technology. That scares me.

We need to be pumping more cash to the Iranian opposition parties to get them to over throw the Theocracy now in place. For the west or Israel to attack Iran, will only serve to force the Iranian opposition, middleclass and moderates, over to the side of the current regime. No matter how happy they will be at such a strike, they can not be seen at all to support it. In an attack against your home country, **** politics, we all come together. An all out war against Iran will be a blood bath, on a scale not seen since the Korean conflict, mountainous terrain is a ***** for high tech warfare.

Iran is one country that needs nuclear power, (not weapons), it generates much of its electricity through the burning fossil fuels, and they have a huge shortage of electricity generation. When Iran returns to normal, when the theocracy is over thrown, we, (the west), will be competing to see who will get the contracts to build their nuclear power plants.

If Iran does get nuclear weapons, I highly doubt they will use them. Being crazy is not synonymous with stupid. Any Nuclear attack on Israel will see every major city in Iran glowing by nightfall.
You must log in or register to reply here.