After lusting over one since they were introduced, I finally got my hands on one of Spydercos new P'kal folders. To my knowledge, this is the first folder specifically designed for the reverse-edge methodology. This knife is a collaboration between "SouthNarc," a well known self-defense/combatives expert, and Spyderco.
My first impression was that this was a very well designed knife. The G-10 handle scales along with a deep choil for the finger make for a rock-solid grip and the ergonomics of the handle are very good in either forward or reverse grip. The blade has a very slight "hook" so that when employed as intended (reverse-grip, edge in, or forward-grip, edge up) it will really "bite" into the target. One small detail that I appreciated was that the knife came out of the box razor-sharp. I usually have to sharpen a new knife to get it up to my standards. I was pleased to see there was no need of that with this one.

The knife is "waved" so that the knife will open as it clears the pocket. However, should one prefer a conventional method of opening, the "wave," a piece of bar-stock threaded into the spine of the blade, can be removed. (note: some people have expressed concern that the wave looks a little flimsy, after playing with it a litte, I think these concerns are unfounded. I think you'd probably rip your pocket out before you'd ever break the wave.)
For those familiar with waved folders, I think you'll like this one. After only having it for part of a day I can already say that not only is it much smoother than my Enduras, it is also more consistent than any of the waved knives that I have tried, including the Gen. 4 Enduras and Delicas, the modified Gen. 3's (like the one pictured below), and the Emerson CQC's.

The lock is what Spyderco calls a Ball Bearing Lock which to me appears to be similar in operation to the Benchmade Axis lock.

here we have the knife:

with a modified Gen. 3 Endura for size comparison: 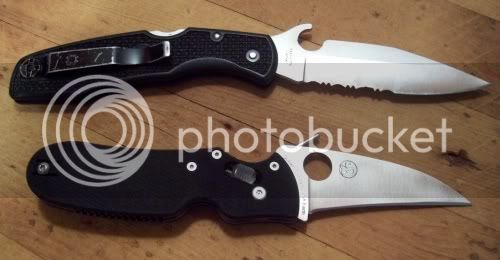 and a couple to show it in the hand: 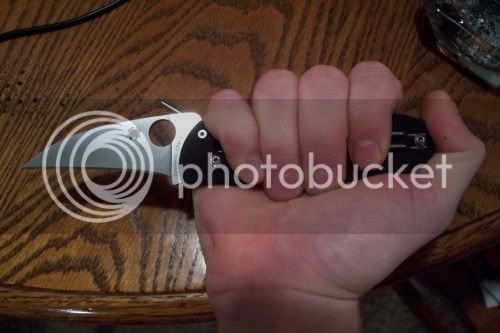 For those not familiar with Waved knives or with the reverse-edge methods, take a look at these two video clips. The first one demonstrates the proper deployment of this knife, the second gives a brief overview of the pikal method.

Looks nice! Thanks for the review. I have been exoperiementing with pikal more and more and may need to look into this blade.
OP

I highly recommend it...I've been playing with it since I took it out of the box and am really happy with it so far.

check out www.shivworks.com to see some other stuff from the guy who designed this one.
A

I looked into it...I'll have to get one to play with. I didn't get any knives for Christmas this year, sadly!

Looks good. makes me wish I would have picked up a Hobbit Warrior when I had the chance. Its another great blade designed for pikal.
You must log in or register to reply here.

Fixed Knife, Folding Knife, Whatever if You Had One Choice on a Knife (not a sword)....