Spartan Ninja Advantage Close Range: Short Sword Ninjato Ninjato Mid Range: Spear Black Egg Spear Long Range: Javelin Shuriken Blowgun
Blowgun Special Weapons: Shield Kusarigama Shield -The Ninjato and Short Sword were tested against gel torsos. The ninjato was able to cut into its shoulder, but when the short sword was thrust into the torso, it hit the metal rod to support the torso and didn't allow a reading. So, they were tested on a pig. The ninjato was able to cut through the pig in two slices while the short sword only managed to cut it up. The edge was given to the ninjato thanks to its power, lightness, superior range, and quickness.
-The spear was thrust at a gel torso, where it proved to be a devastating blow. The black egg was thrown at a Spartan helmet where it was blindingly effective. The spear got the edge since it could kill the opponent, whereas the egg was more of a distraction tactic.
-Neither the shuriken nor the javelin proved itself effective as the shuriken failed to produce more than minor wounds and the javelin proved to be slow and inaccurate. Another Ninja weapon, the blowgun, was also tested. While it also failed to show great killing power on its own, its speed and poison darts gave it the win.
-Being a vital part of Spartan combat, the shield proved itself to be a strong defensive advantage as well as a killing blow. When it was tested on a dummy, it inflicted 45Gs, which is instant death. While the blade of the kusarigama was unable to penatrate the bronze cuirass of the Spartan, the ball & chain proved to be able to distract, disarm, and incapacitate the Spartan. Nevertheless, the shield got the advantage due to its versatility.
[edit] Simulation 3

Similar to Apache vs Gladiator and Viking vs Samurai, the simulation takes place in a woody area. A Spartan appears in his fighting position, while a Ninja is furtively watching him in a tree. The Ninja jumps down,and sneaks up on the Spartan, ready to kill him, only to get struck by the Spartan's shield; the Spartan sensed the Ninja before he could assassinate him. The Ninja retreats into the tall grass and the Spartan loses him. The Ninja reappears swinging the end part of his Kusarigama. He tries to hit the Spartan twice, but the Spartan blocks all of the strikes with his shield. The Spartan then does an "Achilles Strike" (one step, two step, lunge) which the Ninja dodges, and sweeps the Spartan down with the Kusarigama. However the Spartan grabs the chain, forcing the Ninja to break the chain. The Ninja, unable to finish off the Spartan or disarm him, kicks his shield and retreats. He does a flip over a log, with the Spartan hot on his trail. The Ninja then is able to break the Spartan's spear with his Kusarigama, rendering it useless. The Spartan then hits the Ninja with the shield, causing him to fall behind a log. The Ninja recovers and does another kick to the Spartan's shield, only this time throwing a blinding black egg at the Spartan which hits him clean in the helmet, causing him to be temporarily blind. However he recovers and sees the Ninja retreating into the forest, and pursues him. The Ninja then appears and fires several darts from his blowgun, followed by some shuriken, all of which are blocked by the Spartan's shield. The Spartan throws his javelin, which misses, then once again knocks the Ninja down with his shield. The Ninja unsheathes his Ninjato, and attempts to do a jump-strike from a fallen tree, only to be impaled on the Spartan's short sword. The Spartan pushes the Ninja back against the tree, then stabs him again. As the Ninja collapses on the ground, dead, the Spartan triumphantly raises his sword over his head and shouts "SPARTA!"
Overall Winner: Spartan
Despite the Ninja's skill and stealth capabilities and large arsenal of deadly weapons, the Spartan shield was just the killing blow for the ninja, proving itself to be both an immovable defense and deadly weapon. It proved vital to the Spartan for blocking Ninja projectiles and slamming the Ninja to the ground. It is also notable for having the most kills of any weapon in the simulation, scoring more kills on its own than the Ninja did with all of his weapons. The consensus reached was that while the Ninja weapons could disable and injure, the Spartan weapons could kill, so the Ninja was no match in a direct duel.

This is a mismatch in my opinion. Ninja's weren't expected to be combat troops, Spartans were. You're pitting a lightly armed hit and run expert against a heavy in armour trained to slug it out. No contest.

This show was really bad.
The ninjutsu master wasn't. He used weapons which did not historically exist. Most importantly the ninja-to never existed, and I read that crushed glass could not have been used since glass did not exist in Japan in that age.
Those 2 guys came across as the larping ninja fanbois that give serious practitioners a bad name. Why didn't they ask one of the X kan guys? I'd have loved to see e.g. James Wright shihan show his skills.

Anyway yes it's true that ninja were not meant to be battlefield soldiers. Most of the basic fighting techniques that could be considered ninjutsu (that I have seen so far) are more geared towards survival / escape rather than squaring off against an opposite force and duking it out. Or as I read somewhere (I think it was Hatsumi sensei who said this) fighting was the least important skill of a ninja. If you had to fight, it means you had already ****ed up.
B

I remember watching this episode when it first aired. What a ridiculous show.

Anyway, I recall them spending a LOT of time showing how accurate the ninja could be with the poison dart blow gun. In the simulation, WHY on earth would the ninja leave the cover of the tree and just poison the Spartan with a dart as he passed (the ninja being accurate enough to get the dart into the neck or some other unarmoured place). Instead, he creeps up behind the spartan, then YELLS before attacking...thus giving away any intiiative or advantage.

I just can't sit through episodes of this show.

It's all been said.
They should call the show "who's stronger" and just make them armwrestle, for as much as that shows. Besides, everyone knows an orange could defeat an apple.

I think this show was completely fake.
It was hollywood Ninja vs Hollywood Spartan.

I actually think their background consist of being actors and one had 1 year in tae kwon do. So they didn't know how to use the weapons properly. They didn't know that Ninja wore armor(not commonly) that I doubt the Spartan weapons could penetrate. In the Edo period for tameshigiri they were testing cuts on wrought iron. Which was used for the Spartan warrior armor(if not Bronze). Yet for some odd reason even though Ninja can penetrate them, and the Spartan cannot penetrate the Ninja. Somehow the Spartan is a winner? How is a spartan whom is used to phalanx tactics going to beat a Ninja who is used to guerrilla tactics?

Not to mention Ninja utilized explosives and firearms, but since this is not portrayed in Hollywood Ninja. Our Ninja experts failed to mention this. They could have hired Hatsumi or Tanemura. Atleast someone with a legitimate Ninjutsu background. Or Japanese weapon background.

-Also that Ninjato was Fake.

The playing fieldseemed off as well. I would imagine that the spartan would have been attacked in his home, while he was sleeping, and the shield might not be a factor.

I think spartain vs. Samurai and Ninja vs. Hashashin would have been a better mix.
OP

Spartan vs Samurai vs Knight. Have a 3 way dance.

Bob Hubbard said:
Spartan vs Samurai vs Knight. Have a 3 way dance.
Click to expand...

Bob Hubbard said:
All of them?
Click to expand...


Let's get reADY TO RUMBLE
J

One would figure that as the ninja also used small bows that an arrow would have made more sense. To attack an armored and more heavily armed opponent up close is not logical or good strategy.

Guess it's designed more for entertainment than authenticism. After all they do have Jedi and Orcs as well in the series.
OP

I missed the Jedi episode.

is it this one 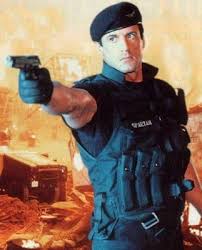 The first one Xue. The second one only plays warriors.

but he's got a gun and he WAS Rocky after all

oooh and what about the Michagan state Spartans

That is hilarious. A true ninja would have spent days, weeks or months working his way into the Spartan camp (somehow) and once earning their trust or breaking in during nightfall would have taken out their mark. Ninja rarely wore their ninja outfits and were more inclined to impersonate other people such as priests, bums, drunks, commoners, samurai, etc.

ninja never wore what they are depicted as wearing. The all black outfit with the hood comes from what kabuki stage hands wore to tell the audience they were "invisible" and should be ignored by the crowd. In plays where ninja were present the ninja would wear what the stage hands wore to give the appearance of being undetectable to the rest of the characters on stage.
You must log in or register to reply here.