The knee, depression and Xingyi to the rescue…

Published by Xue Sheng in the blog Ramblings of a Nèijiā Madman. Views: 85

May 20 was my right knee surgery, and things were progressing as expected until Thursday, July 16, 2020. I was walking, slowly, without crutches and without a cane. I was on my way back to my office, after a lunch outside. I did not trip, there was no jolting of the knee and then all of a sudden an incredibly sharp pain in the right knee that left me wondering just how the heck I was going to make the next 300 feet to my office. I could not put weight on it, and I had no cane. It took a couple minutes of standing on one leg but it calmed down and I was able to limp back to my office. I have been walking with a cane again, especially when I first stand up, ever since. I got kicked out of PT until I saw my MD, who told me to not return to PT. He did give me one exercise to do, a single leg squat, but only until it hurt and then go no further. I am to do this as often as possible during the day. I go back and see him in a couple weeks and then, I guess, we go from there.

Now the pandemic; I have been working from home 3 days a week and I am in the office only 2 days a week (not counting the week I was forced in to quarantine). When this first started it was before knee surgery and I was able to do Sun taijiquan short form and the Cheng Manching form of taiji, and it was pretty great being able to do those a few times a day. After surgery I was not able to do anything until about a week before July 16, I was able to do the majority of the Sun short form again, just not the kick at the end. After the 16th, until now, nothing.

There has also been talk of an early retirement incentive for us old, decrepit, government workers coming down the pike. I saw the bill and much to my surprise, I would actually qualify (dang I’m old), although I would not take it at this time, it was surprising that it was a possibility.

July 16 to 28; All those thoughts of retirement and teaching taijiquan and returning to Xingyiquan seem to be nothing but fantasies, because of the knee. I could not walk, I had knee pain most of the time, and I began to get depressed. I did continue doing the PT leg strengthening exercise that were not weight bearing, but that was all I could do. Xingyi was not going to happen and even doing taiji again seemed rather questionable too.

Saw the MD on the 28th and that is when he stopped PT, but gave me one exercise to do. The partial single leg squat

July 29, 2020; I Had a thought, if I was supposed to do this one exercise for strengthening, that Xingyiquan santi shi might do the same thing. This thought got me out of my funk, so I started standing in Santi as well.

The first day the right leg only held me for 30 seconds before the knee joint had enough. Day 2 got me to 39 seconds (note, mowed the lawn this day and my knees hated me after that), day 3 got me to 1 minute 30 seconds and day 4 got me to 1 minute 50 seconds. Things were improving and it is measurable. So, even though I am still not sure I will ever be able to return to Xingyiquan or even taijiquan like before, there is hope it seems. And maybe my thoughts of retirement are achievable, time will tell.

I am still doing the single leg squat, it is more like a 1/8 squat, and all the non-weight bearing PT exercises and stretching as well. I am going to see where Santi takes me, so far so good. Hopefully when I see the MD again I am doing much better and he does not order an x-ray, an MRI and possibly more surgery. I’ll know more it about a week and a half.

I am a proponent of standing in Santi Shi, it is the basic stance/structure of Xingyiquan. However I do believe that many focus on it to much at the expense of the usefulness of the posture to Xingyiquan. It is important, it trains structure, but one should not forget, ultimately that structure has to move, and I think many do forget that.

I start in Wuji 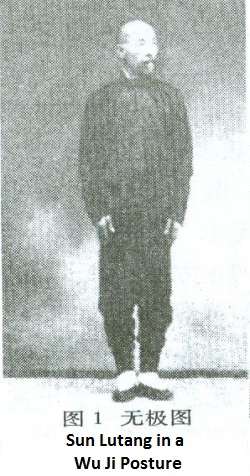 The Song of Wuji
Mixed and swirling all together, inside and outside are cultivated; As different as the waters of the Jinghe and Weihe rivers, yet returning to the Dao. Empty and hollow, natural, the condensed spirit of calm. Transforms emptiness, return to origin, this is the central desire
Click to expand...

Basically, stand there, breathe and relax

The go into left santi shi (right leg back – bears most of the weight) I hold as long as the knee joint allows and then switch to right Santi shi (the numbers on the left leg bearing weight have been 3 minutes, 1 minute, 1 minute 30 seconds, 3 minutes 30 seconds)

The stance is generally weighted 70/30, with 70 percent of your weight on the back leg.

So, hopefully, Xingyiquan basic training will help the knee recover, and get me back on track with marital arts. All this time sitting at home, in front of my computer, waiting for people to e-mail me with PC issues is boring, and time wasted where I could be doing taijiquan and, maybe, just maybe, Xingyiquan. Either way, depression gone and I am working on it, and it is time to get on the exercise bike and see what my range of motion is. That was used last time in PT for the left knee, time to see if it helps the right

Signed in as Xue Sheng